Get your Fantasy Points right here! 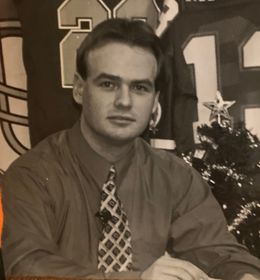 Over the past few years, I’ve been doing a lot of reflecting on the last quarter century and how I was able to carve out a career for myself by recognizing the imminent growth of fantasy football in the mid-90s. But I came up with the idea to start a newsletter not only because I saw the explosive potential of fantasy sports, but also because--as a young father and husband struggling to find his niche--I desperately needed a career that I was passionate about. At the time, most people were oblivious to fantasy sports, yet I was so enthusiastic and animated explaining my idea for a new business that a few friends actually thought I had lost my mind.

I had total clarity though, and my excitement level was off the charts because not only was I convinced fantasy would surge in popularity, I also knew this career path was absolutely perfect for me in every way. I had a deep passion for sports, especially the NFL and fantasy football, which I found myself to be quite good at. I was also heavily influenced by my mom, who was a college writing professor, so I was confident I could convey my thoughts accurately and cohesively via the written word. And finally, with a degree in Communications and a passion for media and broadcasting, I knew I had found a potential career that would allow me to utilize all of my strengths.

It’s still very surreal to think back and realize how every one of my dreams back in ‘95 have come true. Business success, broadcasting career, notoriety, you name it. I’ve actually been lucky enough to do things I couldn’t have dared to dream about back then. As I’ve said many times, I owe a huge debt of gratitude to everyone who helped me along the way, especially those who supported me by subscribing, listening or watching. If that’s you, I thank you again, and I will continue to thank you forever.

As you may know by now, in 2015 I sold that first company and website I founded. This, of course, is why I’ve been doing a lot of reminiscing the last few years. You’d think, since I poured my heart and soul into the company for two decades, that it would bother me to no longer be associated with it. I was definitely concerned about that; but oddly enough, I was more than fine to close that chapter of my life and career, and focus on my media work. But I quickly realized that, because I’m a very goal-oriented person who relishes taking on big challenges and being "all in" on things I’m passionate about, I felt a void even though I was still working in this business.

Just like I knew fantasy football was going to explode in 1995, I know I will fulfill these dreams and more because I wouldn’t even be attempting this final act if I didn’t have the right people alongside me. To repeat: I’d be retired from the fantasy website business had I not come to know and work with rockstars like Joe Dolan, Tom Brolley, and Graham Barfield, plus a guy whose work I’ve admired for a while (and who I came incredibly close to hiring five years ago) in Scott Barrett.

When it comes to actually playing fantasy football, I know I can compete with these young whippersnappers, if not beat their asses on a regular basis. But the fact is, when it comes to analyzing the NFL for fantasy, these guys are better than me. A lot better. I’m sure I could have launched a much less ambitious site that was all about me and my projections, and that it would have been successful. But given how sophisticated the fantasy business has become over the last ten years, I wouldn’t attempt such a thing without first surrounding myself with the best minds in the business. These dudes are razor sharp, but I’m working with them because they’re also all great guys, and we all get along really well. So when they each indicated a strong interest in continuing to work with me, I not only decided to build and launch a new site with them, I made them all significant partners of this new company. This includes Ben Kukainis, who I hired years ago as an editor and proof-reader only to see him show next-level initiative in learning things like web and graphic design, podcasting, social media, business development and more. Ben’s going to handle all the non-football stuff I never or barely had time for at my previous site. We’re also once again working with some old friends in Greg Cosell, Adam Caplan, Tom Simons, Justin Varnes, Paul Kelly, plus some new contributors.

So if you’re here for me, that’s great. I’m going to be around a while and I will continue to produce my signature pieces like my Draft Plan article, Good Vibes/Bad Vibes, etc., and I will continue to manage things like projections and rankings, so I’ll be as involved as I’ve ever been. But for the most part, Joe, Tom, Graham, and Scott will be doing the heavy lifting in terms of written content.

To say we’re all excited about this launch would be the understatement of the century, and our April rollout is only Phase 1 of the site (there will be a Phase 2 and a Phase 3 this year). But given the state of affairs in America and beyond, it’s not exactly a great time to launch a new business. Thing is, I don’t care. We’re moving forward. We’re locked in long-term and we’re not going anywhere. If there’s no NFL season in 2020, we’re all screwed in sense, and we’ll deal with that if happens.

In the meantime, we’ve adjusted our plan to roll this site out as a premium site, with Greg Cosell’s 2020 Draft Guide as our first signature piece of premium content to entice subscribers to purchase a subscription. Until we get more clarity on the upcoming season and whether it will happen or not, Cosell’s guide, along with the rest of our content will all be accessible, provided you sign up for a FREE account (no credit card needed). So please, if you haven’t done that already, don’t leave the site without signing up.

If you’d like to support us now, we are also open for business and taking payments for the next NFL season, and ordering now will not only get you in on the ground floor of this new venture, it will afford you the steepest discount and lowest price we’ll ever offer. Our already competitive pricing has been reduced 30% for those who order now, so if you plan on subscribing for the next NFL season, you’re doing yourself and us a favor by ordering now. If there is no season, your subscription will simply roll over to 2021, so there’s no risk on your part. If the season ends up being shortened considerably, we’ll make the necessary adjustments in terms of credits for the next season.

As I’ve always said, we’re not out to make a quick buck. I’m a guy who in the past didn’t raise his subscription price for over 20 years. We want you here, and we want you to be a part of our community for a long, long time. Down the road, when I ride off into the sunset, you won’t just be in good hands, you’ll be in great hands.